I just Googled and knew there had to be a dozen image search results for this thing and yep, but I saw it today searching for old columns in Collier’s at the library and I was just ‘yes, there it is.’ The trip would be a success now, even if I didn’t find anything. I did, but this is still the first thing I clicked on from the jump drive. And I just read it. OMG, she wouldn’t have made it across the Atlantic Ocean without Lucky Strike. And they want to ban tobacco in New York or something, right? Or wherever it is. We’re grooming the future of this country on smoke free campuses where kids study about heroes who sucked down Lucky Strikes to make the history they’re studying them for. Or something. I don’t know, it’s just awesome. She’s awesome — “her name matches her passion” as Sadie once said — so of course she’s in some giant 1928 Lucky Strike ad just staring at us and being like, cigarettes don’t kill you, these things kept me alive. Four thousand miles of Lucky Strikes. They’re toasted. 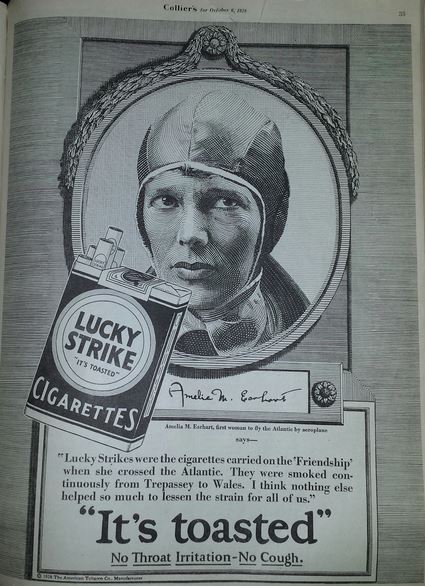